Irregular Lectures in Literature at the Faculty of Humanities of ELTE

A unique lecture series will commence on 4th April at the Eötvös Loránd University. Lazar Fleishman, a researcher of Russian modernism and avantgarde, monographer of Boris Pasternak will give several lectures - in Russian and English. 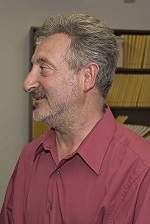 Lazar Fleishman is an expert of 19th and 20th century Russian literature, researcher of Soviet culture and literary life. His fields of study include Russian avantgarde poetry, Russian-Jewish and Russian-Polish art connections. He has also published several books on the topic recently, about Mandelstam, Boris Pasternak, as well as Pasternak's work Doctor Zhivago, the circumstances of its creation as well as its reception. Fleishman is a professor at Stanford University today.

Lazar Fleishman will visit the Faculty of Humanities of the Eötvös Loránd University in April 2011, to give lectures during a four-day period on themes belonging to his field of study, about Pasternak and his main piece Doctor Zhivago, and the poetry of Mayakovsky. Apart from literary issues and problems, the lectures will also cover other art fields, such as painting, music, as well political aspects to enable a wide-angle view. For example, the researcher studies Pasternak's Doctor Zhivago from the angle of cold war circumstances, keeping an eye on the history of pirated editions, as well as CIA interest following its publication. The keywords organisers have given also suggest the diversity of themes that will arise:: Pasternak, Mayakovsky, Leonid Pasternak painter (father of the poet-writer), lyricism, prose, music, painting, modernism, futurism, cold war, Russian emigrant intellectuals, the „Russian Berlin" in the 1920s, pirated editions, 20th century debates on Jewish art, journey to Palestine.

The lecture series comprising a part of the PhD program entitled "Russian Literature and Culture at the Crossroads of East and West" will be organised within the framework of the guest professors' grant program "For Knowledge on a European Scale ELTE". Lectures can be attended between 4 and 8 April, from 10 AM at the ELTE Faculty of Humanities ("BTK"): Budapest, Múzeum krt. 4/D, in the basement Council Chamber ("Alagsori Tanácsterem"). Three of the five lectures will be held in Russian, and two in English language. The detailed program will be as follows: