The majority of higher education students are aware of the importance of continuous training and have no plans to stop studying after obtaining their first degree. The vast majority of students would like to go on to a master's programme-indicates the Graduate Career Tracking 2009 research of over eight thousand students conducted by Educatio Public Services Nonprofit LLC.

According to the survey, many students choose further studies in higher education (21.7 percent) and PhD programmes (17.3 percent). Also nearly every third student plans to spend some time studying abroad.

Most students (41.9 percent) want to move forward onto a master's programme (MSc/MA) after obtaining their first degree. This rate is not really surprising since the vast majority of students had participated in four, five or six year long programmes. The proportion of students choosing the master's programme is above average among students in natural and social sciences, arts interpretation, humanities, information technology and technical majors. This rate is much lower in fields providing mostly undivided programmes, e.g. legal and social, or medical and health care majors. The PhD programme-the highest level of higher education-is especially popular among students of natural science, humanities, medical and health care and arts majors. This form of study is chosen least frequently by students of pedagogy, information technology and arts interpretation.

Postgraduate professional further training is mostly chosen by students of pedagogy, law and administration, medical and health care students. Postgraduate professional further training is not only an organic part of the educational system, but usually also a formal condition of further employment. In contrast, relatively few students choose this form of further studies in special fields like defence and military, arts, arts interpretation and technical subjects.

When we asked about postgraduate professional specialisation and further training, we found that students attending humanities and natural sciences majors and preparing for careers in these fields feel the need for multi-dimensional further training.

Do you plan to continue further higher education studies in one of the programmes below parallel to your present studies or having finished them? 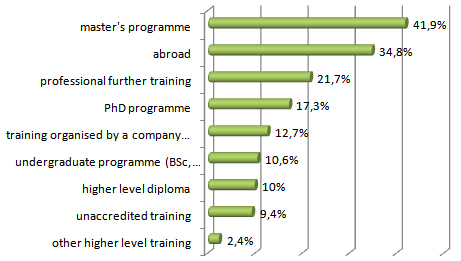 If after graduation you wish to find a job in the professional field you are studying, then do you think you will need further education or specialisation in the first years in addition to obtaining professional experience?
Number of respondents: 7 808 persons 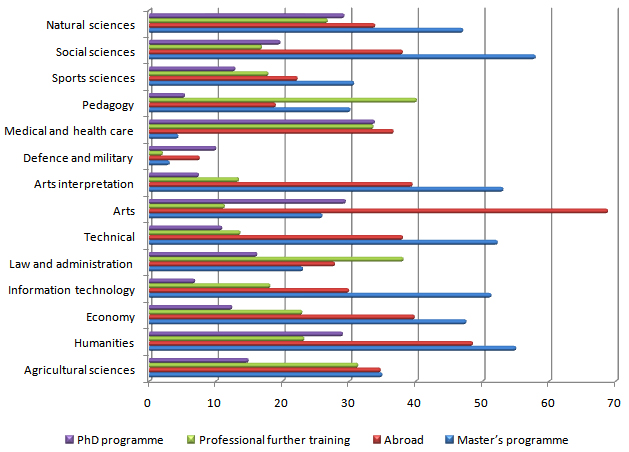 Those who would prefer to go abroad

Studying abroad is very popular among plans related to supplementing higher education studies. Over one third (34.8 percent) of the nearly eight thousand respondents would supplement their knowledge abroad even for a period of only one or two semesters. The rate of students planning to study abroad is very high in the field of arts and is also above average among students in the field of humanities, economics and arts interpretation. Students in the fields of defence and military, pedagogy, law and administration and sports sciences would study abroad in the lowest numbers.

Do you plan to study abroad for at least one semester?
Number of respondents: 7815 persons 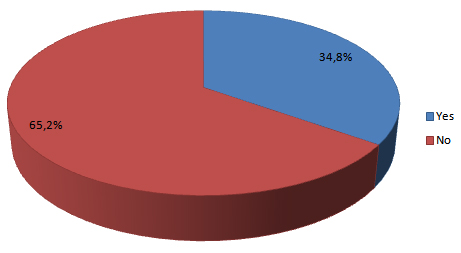 Students asked in the survey were from graduate programmes, undivided programmes or the old system of university/college programmes. It is generally characteristic of higher education students that they do not intend to finish their studies by obtaining a degree, but they would stay in higher education either in a parallel or a continuing programme after graduation. Therefore, higher education does not necessarily define a linear format to studies, but it is expanded horizontally according to individual preferences.

As a part of the research programme called Graduate career tracking 2009, first a nationwide survey was conducted among students in May and June 2009. In the first nationwide survey, 7 837 students attending regular daytime undergraduate and undivided programmes were interviewed. The second nationwide survey starts in Autumn 2009, when 5 500 young people will be interviewed personally who graduated two years earlier in a nationwide, representative sample according to educational fields and genders, similarly to the student survey. In addition to the nationwide research a number of related surveys will be conducted in 2009 and 2010 in which the experiences of lecturers and employers will be summarised and the competencies of graduates will also be surveyed.