It could be asked why a student survey in the graduate career tracking programme is included. Extendingthe target group of the research to incorporate students before graduation is not accidental, since the examination of student motivation and employment expectations and plans have an emphasised role in central GCT (Graduate Career Tracking). This is based on the consideration that in interpreting the labour market career of graduates the system of relations between expectations and the career actually achieved has an important role. Amongst other things, this is reasoned by the as yet relatively poorly-researched phenomenon of expansion in higher education, that there is an increasing proportion of qualifications and degrees that can not be directly ordered to definite employment positions in relation to the dynamic transformation of the economy and its practically constant structural change. It means that there is a decrease in the number and proportion of majors, the completion of which involves generally clearly defined employment opportunities and typical career paths offered by the labour market, as continues to be typical of traditional qualifications such as degrees in medicine, law and some fields of engineering (albeit to a lesser extent in the latter cases). Research in recent years (1) indicates that some students are characterised not only by complete or partial estrangement from their original professional plans during their years of study, but are also taking into account that their degree will not automatically provide employment opportunities in the profession, rather encouraging or forcing young graduates into continual further training and generally flexible application of the knowledge acquired during university or college studies. Thus the survey fits into the logical order of research, the first element of which is the survey of the motivations of the applicants and persons admitted (first year students), the second element is the employment motivation survey of students (including last year students) and the third element is the career tracking of graduates.

Major survey elements of the success of graduates

Also considering the phenomena mentioned above, the national student survey conducted in 2009 was thus based on the hypothesis that the labour market expectations, career strategies and re- or further training plans of students will show different tendencies by field of study. The results confirmed our expectations. The graph below clearly presents that by fields of study, students have different motivations, in which the constant perception of the characteristics and employment perspectives of the given field during the years of study evidently plays a role (2).

Would you like to work in the professional field you are presently studying? 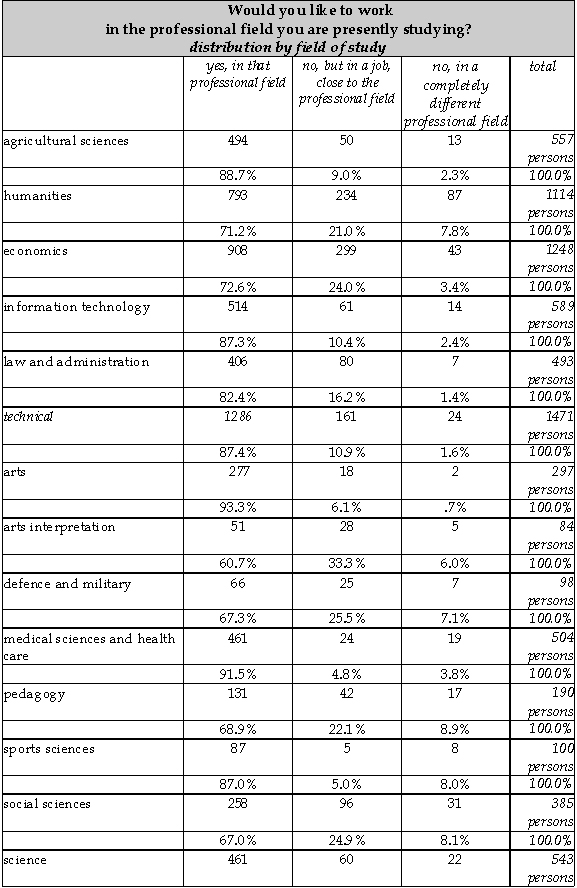 Unfortunately, despite the almost unique sample size among domestic student surveys, comparison by majors is usually impossible, apart from some study programmes with larger numbers of students. We think research on similar subjects must take account of the fact that the real relevance of career tracking may be seen at the level of majors, consequently, if the sample does not allow statistically reliable outcomes for individual majors to be drawn then that must be taken seriously into consideration in the analysis of fields of study, educational areas, and groups of majors. The official classifications of educational fields results in very heterogeneous structures of majors, both in terms of the nature of training and the typical careers related to the qualifications, within which it is true however that the educational areas present a much more homogenous grouping, though often the latter are not applicable in grasping the major-specific relations of employment either. And the modification of official classifications of educational fields sometimes makes drawing up even short term tendencies difficult-just consider the re-classification of the major in communication, which has been one of the most popular majors for years, from the field of humanities to the field of social sciences, or the information technology majors, which were part of the technical educational field not very long ago but are now classified as an independent field. And we have not mentioned the change from groups of majors to educational field in relation with the classification of majors, which makes comparisons in time extremely difficult, as well as the comparison of the position of graduates from the traditional and the Bologna systems that are entering the labour market at the same time.

The questionnaire for the student motivation survey was built up to be closely related in themes to a survey on a similar subject conducted in previous years, thus providing an opportunity to draw up tendencies across approximately one decade, as well as to conduct comparative analysis of the results characteristic of the individual years of data collection. Additionally this questionnaire serves as a sample for the institutional level student motivation surveys, too, thus ensuring their thematic and questioning methodological unity and the application of equivalent questionnaire blocks required for the description of national tendencies for educational fields.